Welcome to Ventimiglia Alta Words from the Ramparts and Beyond. 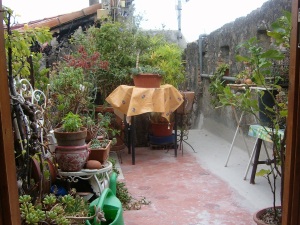 Sometimes my little terrace garden is just that. I open the french doors that lead to it from the kitchen to water my plants, to admire the view or to check out what’s going on in the street four floors below. Other times though, especially very early in the morning when there’s hardly anyone else about, when I step outside I’m struck with awe at being in the ramparts of a medieval town. Ventimiglia was fortified as early as the 11th century. Very little remains of those original walls: as  the town grew its boundries were extended and new, stronger walls were built. I live above Porta Nizza, in a part of the wall which dates from the 16th century when Ventimiglia was under the control of the Genoan Republic.

On my right as I step outside the parapet is almost taller than I am. Through a loophole I catch a glimpse of the sea. Standing on tiptoe I can see further out to sea – I love these crisp autumn days when Corsica dominates the far horizon in the morning and fantastic sunsets captivate the early evenings.

A lower parapet on the other side of the wall gives me a birds-eye view of Ventimiglia Alta’s main street, Via Garibaldi. At the end of my terrace a narrow flight of steps leads down to a walk way under the ramparts – you can see this walkway from inside the gateway.

Below the walkway is Porta  Nizza– Nice Gateway – in Italian Nizza is the name for the nearby French city of Nice. Clearly the gateway hasn’t always been called that. In 1600, the Prior of San Francesco Convent referred to this gateway by its earlier name – San Francesco Gateway as the former convent is almost immediately inside the gateway. Only later it was renamed Porta Nizza as it was the main gateway on the road to the west and to France and all the traffic travelling east and west along the coast passed along Via Garibaldi. If you have a chance to see some old postcards of the early 1900s you’ll see the horse-drawn omnibus that was used then.

In 1895 the town bought the gateway and walls from the State with the promise of keeping it in good condition. The surround in great blocks of stone dates from the 1830s when the construction of the Annunziata Redoubt and the reconstruction of San Paolo Fort overlooking the town brought the town’s 16th C fortification walls into line with modern defence systems. From outside the wall, in Piazza Funtanin, you can see the damaged stonework in the gateway’s top left corner, caused by allied bombardment towards the end of WW II when Ventimiglia Alta was incorrectly believed to have been a German stronghold. Above the centre of the archway you can make out the trace of an earlier brick archway.

To your left  in Piazza Funtanin are two excellent eateries: Bar-Ristorante-Pizzeria-B&B Porta Nizza and Antica Osteria U Funtanin specialising in fresh fish.

In the weeks ahead we’re going to explore Ventimiglia Alta together, looking at its other gateways, its fascinating alleyways, picturesque piazzas and more …

In the meantime, if you’re impatient to know how a New Zealander comes to be living in Ventimiglia Alta – and loving it – you might like to read my book “Portraits of the Riviera” by Carolyn McKenzie ISBN 0-14-301911-2, Penguin NZ.

And if you’re going to be in Ventimiglia Alta soon you might like to look at my ebook for PC and kindle “How to explore Ventimiglia Alta on the Italian Riviera” by Carolyn McKenzie http://amzn.to/11I5YcK or look at www.ventimigliaalta.it

My other ebooks with a local them are:

Several slightly spooky short stories set on and around the Italian Riviera http://amzn.to/18RxYgu

The Sanctuary of Our Lady of Virtues – a Miracle, a Pilgrimage and an Easter picnic

How the British came to Bordighera on the Italian Riviera http://amzn.to/1bjXoW3

You may also enjoy:

How to turn your photos into 3D greeting cards http://amzn.to/1axBD4k