Summer in New Zealand is never complete without a picnic at the beach in the shade of a pohutukawa. 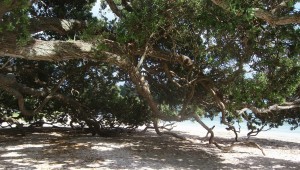 This massive pohutukawa reaches right down to the high tide mark at Cockle Bay, east Auckland.

These magnificent trees flower in the run up to the festive season so it’s hardly surprising that, with their delicate long-stamened flowers, they have been nicknamed the New Zealand Christmas tree. 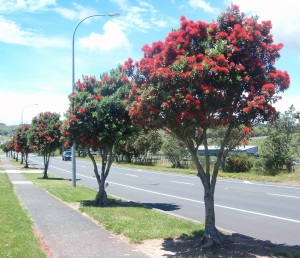 The pohutukawa (metorsideros excelsa) flourishes in the northern half of New Zealand’s North Island, and in particular in coastal regions. They belong to the myrtle family and while traditionally their flowers are a deep Christmassy red, they can range from creamy white and lemon through pink and salmon to almost orange. The tree itself often has multiple trunks, which as the tree ages, tend to be festooned with drooping aerial roots or entwined with a lattice work of them. 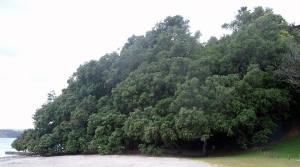 Views from the east and west of two ancient, intertwined pohutukawa on the beach at Cockle Bay.

Pohutukawa branch is host to smaller plants (left), and aerial roots on a very old tree in Devonport, Auckland.

The tree can reach a height of around 20 metres with a crown width of a good 35 metres. Gradually over the years the tree’s trunks will fan outwards so that in really old ones they may be lying horizontally along the ground.

The pohutukawa’s flowers and small oval leaves lend themselves perfectly to stylization, as in the Auckland City Council’s logo.

Ken – was it you or your pea-brained girlfriend who carved your name so deeply into this ancient, majestic pohutukawa at Cockle Bay? Shame on you, you bully.