East Auckland’s Mount Wellington – or Maungarei, to use its original Maori name – is an extinct volcano, the youngest on-shore one in the region’s volcanic field. It last erupted 9- or 10,000 years ago and although ‘Maungarei’ means ‘the watchful mountain’ in Maori, it isn’t expected to erupt again anytime soon. Although, like most of Auckland’s volcanic cones, it’s called a Mount, it’s only 350 metres high. When Maori settled in the area around 600 years ago, they built a fortified pa on it and their vegetables flourished in the rich volcanic soil.

The northern slopes of Maungarei-Mount Wellington, as seen from the wetlands, with part of the quarry rock face on the right.

The lava flow to the north of Maungarei was quarried for bluestone (basalt) from 1936 to 2001. Over 18 million cubic metres of rock were extracted from a 220 acre area, providing a large part of the building stone for Auckland and further afield. 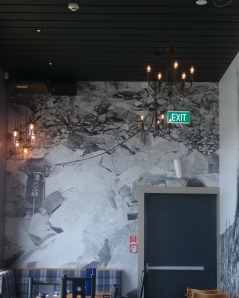 This feature wall in the nearby Speight’s Ale House  show old time quarrying in progress.

In 2001 there are any number of things to do with the decommissioned quarry, from total abandonment to lining it with a supposedly watertight material and using it as a rubbish dump. In fact, the latter solution was put forward but the project foundered and the site has now become an attractive wetlands nature reserve. 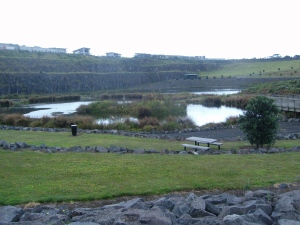 A pukeko crosses the boardwalk.

A natural spring at the edge of the quarried area provides a series of small lakes which are home to pukeko, ducks, swans and water fowl, while tui and fantail love the flax flowers in the landscaped slopes surrounding the lakes. 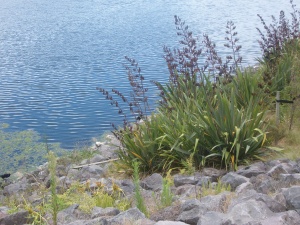 The reserve is a real asset to the residents of adjoining Stonefields: it provides a very welcome outdoor escape from some of the rather compact townhouse dwellings. A picnic area, grassy paths and boardwalks around the lakes make this a pleasant place to relax. 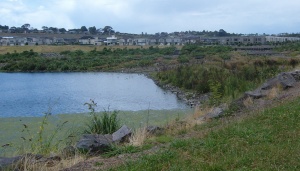 Give me the joys and challenges of living in Ventimiglia Alta any day, but the residents of Stonefields are no doubt happy to have this peaceful reserve nearby instead of a rubbish dump!