In the mid-1800s New Zealand was a fledgling British colony. Scattered settlements around the newly established capital of Auckland were vulnerable to attack from certain native Maori tribes and from aspiring French colonists. Retired British soldiers who had already seen at least 15 years active service in other British colonies, particularly India, were recruited to settle in the Auckland region. Their duties were hardly ‘military’: they were to patrol their own settlement and attend church service. There were four such settlements (in Onehunga, Otahuhu, Panmure and Howick) forming a line of defense against attack from the south and east. They were known as Fencibles, meaning simply ‘able to defend’, and being essentially of good character, tradesmen, usually married and in their 40s, they were ideal immigrants – just what the new colony needed. New Zealand offered many of the Fencibles an escape from the squalor of the Industrial Revolution or the despair of the Irish potato famine. Not that getting to New Zealand was easy. In the 1840s a sailing ship took around 100 days to reach Auckland from Britain. Conditions onboard were difficult. Once the excitement of the departure had passed the days at sea must have seemed interminable. Each family’s baggage allowance was limited to a wooden chest, measuring 80cm x 50cm x 45cm.

Once the families came ashore their hopes were dashed of finding the two-roomed wooden houses (on 2 acres of at least partially cleared land) that they had been promised during recruitment. A tent on the beach was often their first shelter. 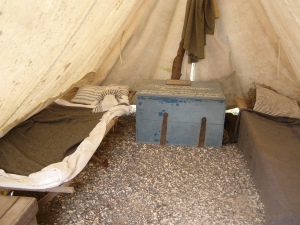 Notice how the pillow (and the mattress) was stuffed with what appears to be twigs. This is mangemange (muehlenbeckia complexa), a native New Zealand plant which is wiry and springy and actually quite comfortable to lie on.

As soon as possible the fencibles moved into huts made from bundles of raupo – New Zealand swamp reeds. 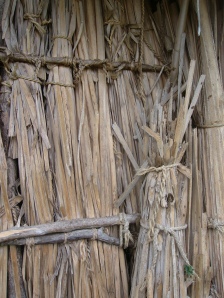 Cooking could at least be done inside – the soot-darkened roof is from an open hearth in the centre of the dirt floor. Insects tended to live in the roofing so a sheet was slung over the beds as a sort of ceiling. 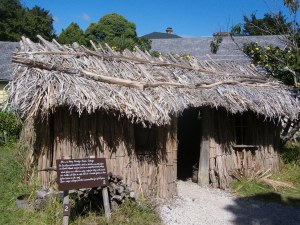 Some of the raupo shanties had a wooden chimney, and although there was sometimes glass in the windows these dwellings must have been miserably cold and damp when it rained. No wonder the Fencible families rebelled: this was not much better that what they had left in Britain. 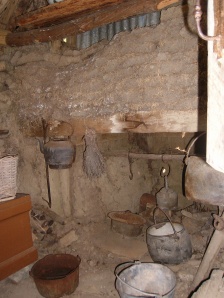 An earth-sod cottage, with wooden chimney and fireplace for cooking

Gradually the wooden cottages were built and the scrub land was cleared. Sometimes larger, two-family cottages were built right on the boundary of two plots of land: a thin partition divided the cottage in half but provided scant privacy for anything above a whisper. At last though they had a brick fireplace, real beds and the chance to paper over drafty cracks in the walls with newspapers, pages from ‘The Illustrated London News” and even wallpaper. 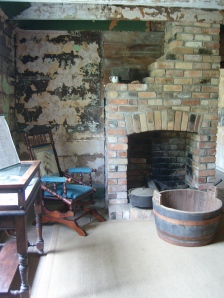 layers of wallpaper and newspaper covered the walls (on the right)

In spite of the hardships the Fencible families generally flourished and real communities formed. Between 1847 and 1852 around 2,500 men, women and children were brought to New Zealand with this scheme. After seven years their cottage and land became their own property. Many of the families stayed in the  area and contributed greatly to Auckland’s growth and development.

The Fencible and early settler period is brought to life at Howick Historical Village in east Auckland. The open-air museum was established by bringing together on one site buildings from Howick and Panmure’s Fencible period. All the photos in this article were taken at the village. As well as furnished dwellings, other buildings include a school, a courthouse, a pub, a church (where weddings are held) and a blacksmith’s forge. www.fencible.org.nz

Maria O’Leary, the wife Captain Robert Hattaway, one of the Howick Fencibles, planted these macracarpa trees on their farmland in the 1850s. 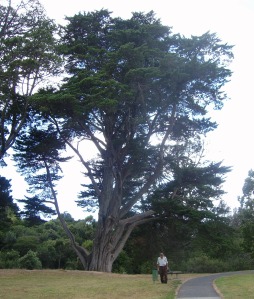 The trees are now within the Cascades Reserve, a wetland area crossed by the Pakuranga Stream and Wakaaranga Creek, and adjoining the Howick Historical Village site. The waterways and their catchment area are currently being revitalized by Landcare Trust through a public awareness and environmental education campaign called ‘Volcano to Sea’. www.landcare.org.nz

This track, paved with volcanic rock slabs from nearby Pigeon Mountain-O Huiarangi crossed the reserve, It was constructed by pioneer farmers in the 1840s.