It’s the last thing I’d ever have expected to find at Hobsonville Point Farmers Market, but as the free taster – I’m told by the stallholder that it’s a sort of chorizo – melts in my mouth I recognize it instantly, as much by its texture as by its flavour. A specialty of southern Italy’s Calabria region, ‘nduja is finely ground pork meat and fat turned bright orange and fiery by the addition of ground chili pepper and spices. Unlike salami which can be thinly sliced, ‘nduja (pronounced “in-do-ya”) is soft and spreadable – delicious on a cracker or stirred into a pasta sauce or stew. And being so hot, a little goes a very long way. 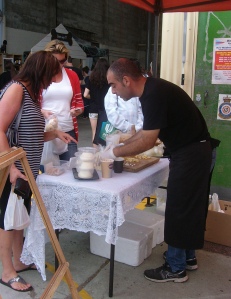 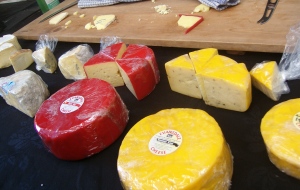 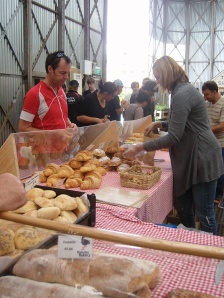 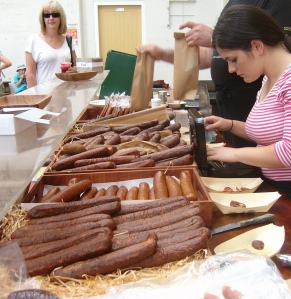 Salash Delicatessen is a family business with Serbian origins. Their sausages and salami range from mild to hell hot – my favourite. http://www.salash.co.nz

Every Saturday and Sunday from 9am to 1pm Hobsonville Point Farmers Market takes place in and around a giant ex-airbase hangar, breathing new life into a building that was decommissioned when the New Zealand Air Force moved away from its helicopter and seaplane base there in 2002. 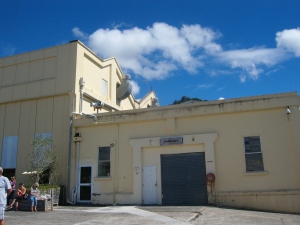 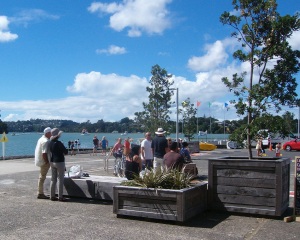 Hobsonville Point, in Auckland’s west and on the innermost reaches of the Waitemata Harbour, is one of the city’s newest suburbs. The development’s well-chosen slogan is “Moments away, a world apart”. During the week this is entirely true: it’s a 25-minute ferry ride between downtown central Auckland and the Point’s new all-tides wharf. 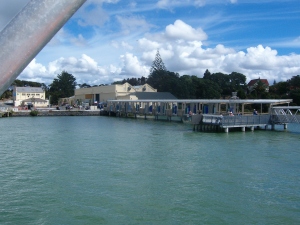 Taking the ferry up the Harbour, under the Harbour Bridge, past Chelsea Sugar Refinery, to step off the wharf where the market is held.

By car or bus I imagine it’s rather more than just moments away, but it certainly is worlds apart – the Air Force buildings (hangars, barracks, married officers’ houses and the Base Commander’s house) and open spaces remain as part of the suburb’s unique identity, making it completely different to any other emerging residential area in Auckland. Panels along the covered wharf recount the area’s history and Virginia King’s Hinaki eel trap sculpture on the wharf is one of several that make up the urban décor.

This giant stainless steel dog by Steve Woodward stands in front of the soon-to-be-renovated barracks. Below one of the fine houses which were built for the married Air Force officers.

Virginia King’s Hinaki – eel trap extends through a hole in the wharf, down towardsthe sea. It is encircled by Fiona Farrell’s poem Eel. 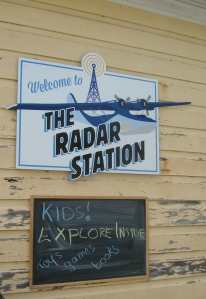 For now the ferry service doesn’t run at the weekends but when the Farmers Market organisers put on a special event, such as last weekend’s “Doggy Day Out”, a charter ferry service runs for a very reasonable NZ$10 return, making a trip to Hobsonville Point and its market well worthwhile. And as with all great food markets it really pays to go early and buy early – stocks of specialist goodies do run out towards closing time. 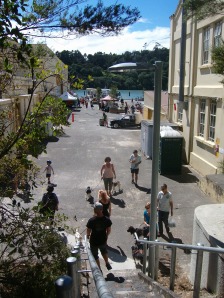